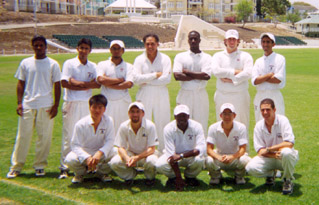 Highlights from the Haverford cricket team's Barbados trip in late May:

Since Barbados, homeland of the all-time all-rounder Sir Garfield Sobers, is to cricket what San Pedro de Macoris is to shortstops, the Ford XI knew it was in for tough competition. However, Haverford made a strong showing the first match before bowing to the National Under-19 Team at Combermere School. Playing on a dirt wicket, unlike the cement and artificial turf of the Cope Field wicket, Haverford adjusted well, with Anirudh Suri '06 taking three wickets, but the home bats could not be contained. Sartaj Bhuiyan, like Suri a rising sophomore, opened Haverford's batting with a stellar 62 and Joe Kim '04 scored 12 runs on only five balls while making a fine catch, as did Garrett McVaugh â€˜04.

On the following day, Haverford evened its record with a 273-run total (for six wickets in 35 overs), defeating a local secondary school in Speightstown (206 all out). Bhuiyan opened with 40 and Shawn Alexander '03 celebrated his Haverford graduation less than a week before with 51 runs while McVaugh produced 27.

The Fords then got a day off which seems to have had a fishy theme. They followed the finny creatures while snorkeling along a coral reef in search of a shipwreck and then feasted on their guides' relatives that night in the hotspot of Oistins, a town outside of Bridgetown, the capital.

Back on the pitch the next day, Haverford's bowlers handled all but one of the batsmen from the College & Park School brilliantly. Alas, Mr. J. Yearwood of the home team surpassed a century with 102 runs to propel his team to 213 for eight in 35 overs. Reid Sherman '04, who had spent the previous semester at the U. of the West Indies branch in Barbados improving his cricket (in between studying, needless to say!), showed what he had learned with 44 runs and Coach Kamran Khan stepped in for a solid 35. But it wasn't enough, and the Fords were all out at 192, a tough 21-run loss.

In their island finale, Haverford bowed to the University of the West Indies on UWI's beautiful new ground, "3Ws Oval." Successful bowling by Khan, McVaugh, and Bhuiyan raised the visitors' hopes while Tim Lee '06 took two catches and Ashwath Trasi '05 turned in a fielding gem. However, HC batting wasn't up to its task, especially after Khan was caught out on a call which would have been questionable if questioning calls was allowable in cricket, Suri notched 15 not out and McVaugh was on his way with 17 when he was caught to extinguish the Fords' waning hopes at 130 for six in 35 overs.

The vice president of UWI visited the Haverford team before the match and plans are underway for further cricket exchanges between the two institutions.

Bhuiyan, who will attempt to add soccer to his college sporting endeavors this fall, led the scoring parade for the tour with 133 runs (33.25 per match, a notable total in international play). Khan added 71, McVaugh 68, Alexander 60, and Sherman 54. Of the bowlers, Bhuiyan (three wickets taken for 33 runs), Alexander (3 for 36), McVaugh (2 for 35) and Suri (3 for 74) all performed well. Khan led the fielders with three catches.

Considering the absence of Captain Arunabh Ghosh '04, who could not make the trip due to visa problems, and star soph Tarek Khondker, who had to return to Bangladesh after deaths in his family, the Fords played very well indeed. As always, the off-the-field camaraderie with their hosts and such pastimes as (in Garrett McVaugh's words) "snorkeling, time at the beach, Oistins, trivia and curry at the Coach House, Anirudh's victory dances after taking wickets, karaoke at the hotel, "The Dragon" (unexplained), air-conditioning tokens, WWF moves in the pool, and, perhaps the most memorable of all, our beloved Chefette (a fast-food restaurant)" were perhaps even more educational than the fine cricket.