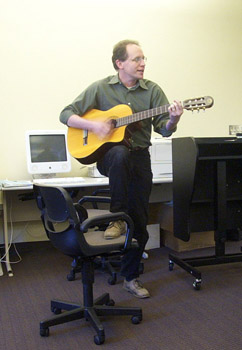 John Dougherty performs for his class.

Assistant Professor of Computer Science John“JD” Dougherty has been using music and song to reinforce many computing concepts.  He does not (yet) use computers to generate music; rather, he uses music to help students appreciate such principles as recursion, loops, redundancy and semi-decidability.

This approach has generated considerable interest among computing educators.  Last fall, Dougherty made a technical presentation about computational singing that was awarded Best Paper at the Consortium for Computing Sciences in Colleges, Eastern Region (CCSCE) 2007 conference. Dougherty recently shared his methods with his colleagues as the banquet keynote speaker for CCSCE 2008 at Hood College, Oct. 10 and 11.

“Songs are used in elementary school effectively to help students remember,” reports Dougherty. â€œThe challenge here is that not only are the concepts more difficult to grasp, but I am trying to get the lyrics and the music to work together on a concept.”

Dougherty is not the first Haverford professor to take this musical path; Associate Professor of Physics Walter Smith also uses songs to help his students comprehend course material.  Smith has not only provided inspiration for Dougherty's efforts, but has recently worked with him as a recording engineer.

Dougherty composes most of the songs, but a few have been submitted by past and current Haverford students.  Joseph Huttner '09 contributed a sing-a-long piece called“Oh Computer!” (to the tune of“Oh Susannah!”) that tracks the history of computing from its earliest incarnation to the modern personal computer.“I enjoyed working on the project because I was able to learn about fundamental concepts of computer science, such as recursion, loops, and sequential instructions, in a non-traditional medium,” he says. â€œThat is to say, writing a sing-a-long helped me learn about computer science.  That's awesome!”

Huttner thinks Dougherty's songs are beneficial to students because, he says,“they disprove the incorrect stereotype that computer science is just about writing code and acting like a nerd.  In truth, computer science is about using fundamental concepts to solve new and interesting problems.  For example, by analyzing songwriting through the lens of a computer scientist, I was able to develop a new approach to songwriting.”

Listen to Dougherty's ditties at www.cs.haverford.edu/songs.