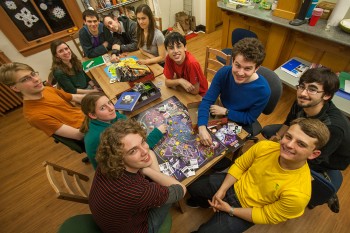 Nerd House is the latest addition to Haverford's list of community living options.

For students looking to forge close connections around shared interests, Haverford offers all sorts of options beyond Room Draw. Special interest housing choices include La Casa Hispánica (for those attuned to the culture of the Spanish-speaking world); Cadbury House (quiet study, and alcohol and drug-free); and the Ira de A. Reid House/Black Cultural Center (devoted to extending the legacy of Reid, a renowned sociologist and Haverford's first tenured African American faculty member).

There are also several student-proposed community housing group—located in the Haverford College Apartments—such as Quaker House, Christian House, and Ehaus (whose residents share an affinity for living in an environmentally conscious way). And making its debut at the start of the academic year was the latest addition to this list: Nerd House. Located in Yarnall Community House, across the footbridge over Railroad Avenue, Nerd House was born in the same way so many things happen at Haverford: “We began with several different groups of friends who all had similar interests,” says Brandon Henken '16, one of the organizers.“Like nodes on a graph, we gradually became connected.”

The Nerd House mission statement declares the residents' aim to create a space“where gaming, tech, TV, fantasy, anime, and science aficionados, as well as all other variety of geek can come together. We hope to facilitate the communication, collaboration, and recreation of our socially awkward minority and tap into the potential power of joint nerd-dom.”

Nerd power has been visible in full force since the residents launched what has proved to be a popular schedule of social activities. There have been strategy board game nights, movie nights, a video game tournament, a film noir screening accompanied by a live jazz sextet, a Victorian-era murder-mystery party, and a Halloween costume ball. In November, the Nerd House denizens booked a room in Stokes and hosted a viewing party for the BBC America broadcast of the Doctor Who 50th Anniversary Special. Also a major achievement for Nerd House was Humans vs. Zombies, a campus-wide game of tag, organized with the group Fords Against Boredom, that spanned two weeks last fall and drew nearly 200 participants.

“Anyone on campus is invited to these events; we truly reach out to the community,” says Henken, who prefers the term“nerdlings” to“nerds.” Turnout has been impressive, he says, and the Nerd House residents have received many compliments about their events and the general spirit of the house.“Community housing at Haverford is an excellent embodiment of the agency students have here,” Henken says.“If there is not a club or group that suits your interests, you can create one.”