A Close-Up View of Conflict 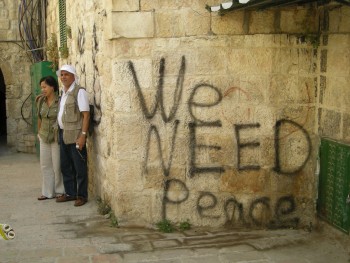 Graffiti in the Arab quarter of the Old City of Jerusalem.

Published
Share
Members of Haverford's Israel/Palestine reading group traveled to the Middle East in May to get firsthand knowledge of their subject.

“There's no better way to understand a conflict than to see how it affects the people involved,” says Travis Green '07.“When students leave the beautiful Haverford campus, and see what's not so beautiful about the world, it's a great way to learn.”

Green got a chance to test this theory in May when he and a group of five current Haverford students joined an American Friends Service Committee (AFSC) delegation to Israel and Palestine. The trip grew from a campus reading group on the Israel/Palestine conflict, which operates under the umbrella of the Center for Peace and Global Citizenship (CPGC).

As a 2007 Haverford House Fellow, Green was working with the AFSC's Middle East program and, as part of his fellowship, was thinking of ways to connect his work with the Haverford community. He approached the CPGC with his idea for a reading group and a potential future trip, and was met with immediate enthusiasm.

“Haverford is one of the few places where you can dream that boldly and in six months see it come true,” he says.

The spring trip was organized in partnership with the AFSC and the Washington, D.C.-based Interfaith Peacebuilders (IPB). The delegation traveled with the label“Legacies of 1948.” The purpose was to further dialogue on peace, and to deepen understanding of the conflict.

The group arrived in East Jerusalem on May 27, 2008; it was the same month as the 40th anniversary of the founding of Israel, which is regarded by Israelis as a celebration of independence and referred to by Palestinians as the“nabka” or catastrophe, as they recall their displacement.  During the two-week trip, the delegation met with Palestinian refugees; visited Yad Vashem, the Israeli Holocaust museum; heard from human rights workers and government figures; and interacted with the nonviolent peace movements in both countries.

Says Eric Lundblade '09 of the trip,“I'd never been in a conflict zone, and to see the walls, the barbed wire, the soldiers and the checkpoints, to be in a place you hear about in the news all the time, and to see the conflict on the ground opened my eyes to what things really look like over there.”

Green recalls a visit to Birzeit University in the West Bankâ€”once known, he says, as the Harvard of Palestinian societyâ€”and was affected by its similarity to Haverford. He heard stories of military checkpoints on campus, the loss of an international teaching staff, and students from the Palestinian territories who could no longer get to the University.

“I thought about Haverford, and what it would be like if students from as far away as Arizona or California couldn't attend,” he says.“It was inspiring to see this community carry on with an educational system during a time of conflict.”

Trip participants were especially moved by an encounter with the group Combatants for Peace, which was started by an ex-fighter who had always believed violence was the answer until he was sent to prison and talked with a peace-advocating guard. Hearing the founder's recounting of the death of his 10-year-old daughter, who was killed by an Israeli soldier in a case of mistaken identity, was something Lundblade will never forget.“It was powerful to hear him talk about his experience,” he says,“and how he saw the tragedy as motivation to keep fighting for lasting peace.”

Members of the IPB and the AFSC were impressed with the Haverford students' maturity and educated grasp of the conflict. In fact, the delegation's tour guide, whose regular clients were often diplomats, gave a speech at the end of the trip calling the group“the most special delegation” he'd ever seen. It gave him hope, he said, to see young people working on these issues.

Both the trip and the reading group were supported in large part by the Hitti-Winder Fund, which was started by the family of Bayly Winder '43 and noted Middle Eastern scholar Philip Hitti (Winder's father-in-law). The fund, says Bayly Winder's son Philip '73, was created to foster the development of a“center of excellence” at Haverford that would focus on the region.

Philip Winder believes both the reading group and trip were worthy of the fund's support because, he says,“they allow people to make their own assessments and learn about the facts firsthand. [The group is] a portal for other Haverford students to get a better understanding of what's going on in the Middle East, and enable them to become ambassadors between the Arab world and the U.S.”

The reading group continues today, with 10 students meeting regularly to discuss books and articles from academic, historical, religious, and political perspectives. The group includes diverse viewpoints and a cross-section of religious representation.

CPGC International Program Coordinator Alison Castel has a personal and professional interest in the reading group.“I've been to Israel many times,” she says,“and my background guided me towards one perspective. I want to broaden my view.” Because the Israel/Palestine conflict is such a controversial topic, Castel says, the group's conversations are based on readings,“to provide context to media coverage.”

This year, Eric Lundblade and Samee Sulaiman '10 are co-facilitators of the Israel-Palestine reading group, and readings include Sandy Tolan's novel Lemon Tree and Amos Oz's book of essays In the Land of Israel.

Lundblade appreciates the exposure to materials outside of mainstream media.“As a history major, I'm always on the lookout for more information, lending context and texture to what others say,” he explains.“Delving into the history and theory [of the conflict] has been really useful, and has broadened my academic experience. I'm applying things I learn in the classroom to events that are continuously unfolding.”

His involvement in the reading group and trip has also influenced his vision of his own future.“At Haverford I learned about people who work for justice, and it makes me think about what to do with my life,” he says.“It raises questions about taking a stand, making a difference.”