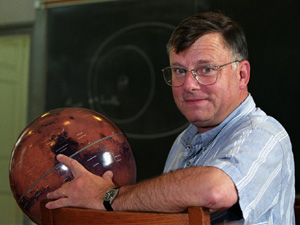 Published
Share
For three days during the week of August 25, an estimated 700 people came to Strawbridge Observatory for a chance to see one of Earth's near neighbors.

In the last days of August when Mars had its closest“encounter” with Earth – closer than at any time in the past 60,000 years – observatories and amateur groups around the world opened their facilities to give the public a once-in-a-lifetime glimpse of the Red Planet.

For three days during the week of August 25, an estimated 700 people came to Haverford's Strawbridge Observatory for a chance to see one of Earth's near neighbors. The first night's visitors waited for the clouds to lift, which they never did, so Haverford astronomer Bruce Partridge gave a few impromptu mini-lectures on the phenomenon of the planet's close proximity to the Earth and some of its characteristics.

The next evening's viewing was more successful, as over 400 visitors to the observatory, including Haverford students, faculty, staff and their families waited patiently in line, sharing information about the planets and the various constellations. One-by-one they were able to gaze through one of the College's three telescopes at what appeared to be a large orange colored disk with a small bright point on its circumference – the south polar ice cap of Mars. And they were able to see the variation and difference in color and brightness between the regions of Mars that are dust-covered and those that are mostly the original lava-like rock of the Martian surface.

Assisted by Fronefield Crawford, a visiting assistant professor of physics, and Scott Shelley, an instructional lab associate in physics, Partridge used the occasion to explain some of the properties of Mars, including the fact that the bright spot they were viewing was the south polar cap gradually evaporating.

Partridge fielded a number of other questions from the crowd which ranged from very young children to senior citizens:
- was there liquid or water on the surface of Mars (â€œno”)
- when would Mars be this close to the Earth again (â€œabout 250 years”)
- what is the likelihood of a manned expedition to Mars (â€œIt would require a huge political and financial commitment because of the need for enough fuel for the astronauts' 100-million-mile journey back to Earth.”)
- do Martians exist (â€œno comment”)

He also suggested that those who are generally interested in the subject of Mars should watch for reports in December when both NASA and the European Space Agency plan to land probes on the neighboring planet.

Visitors to the Strawbridge Observatory should enter Haverford's campus at Walton Road from College Avenue (between Lancaster Ave. and Haverford Road) and follow the signs for visitors' parking. The observatory is located on Walton Road.