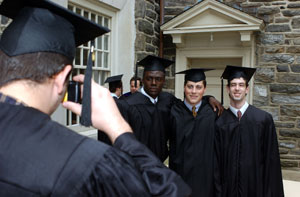 Published
Share
On Sunday, May 16, the largest class in Haverford College history-323 seniors strong-marched across campus to receive their diplomas from President Tritton in front of Roberts Hall.

Goodall reminded them that the power to change the world lies in their hands. "Hang on to what you have learned about your important role in this life," she said. "Every day, you make a difference by the way you behave, by the way you speak, above all by your actions." To the audience's delight, she also provided an auditory example of how one of her chimpanzees would say "congratulations."

Krugman, who spoke of the Bush administration's shortcomings regarding the war in Iraq, encouraged graduates to stand up for what they believed, no matter what opposition they faced. "Whatever it is you're worried about, learn as much as you can," he said. "And learning what other people think and what other people have said, think for yourself."

Sanchez offered encouragement in the form of a lyrical poem. "So listen, gentle men, gentle women, pull your hearts out of your armpits, get your tuxedoes out of mothballs, put your long red dress on, girls, and snap your breasts into place, as we go sailing on tongues, loving, living, learning to speak without a crutch," she told the graduates.

Turrell spoke of his own college graduation and his subsequent search for signs leading to his destiny. What he discovered, he said, was that "there are signs about, and sometimes we're the ones who make these signs. These signs are simple, and part of the self-fulfilling prophecy that we create as we make our lives."

Following the awarding of degrees, the new Haverford alumni joined their families and friends for a reception on Founders Green.