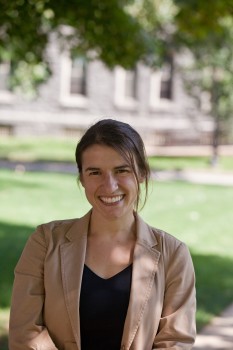 Published
Share
Assistant Professor of Chemistry Lou Charkoudian '03, working with colleagues at Stanford and Berkeley, has published a study in the journal Science that could help expand the already important role of fluorine in medicinal chemistry.

It is estimated that 20 to 30 percent of drugs on the marketâ€”with sales of more than $20 billionâ€”contain at least one fluorine atom.  The unusual elemental properties of fluorine that serve as the basis for its success also make it incredibly difficult for chemists to incorporate the element into pharmaceuticals.  An even greater challenge is to install fluorine on the backbone of natural product medicines (bioactive chemical compounds produced by living organisms), which are structurally very complex.

But research done by Assistant Professor of Chemistry Lou Charkoudian '03, along with colleagues at Stanford University and the University of California Berkeley, may open the door to an environmentally friendly and efficient route to fluorinated natural products.

In their study, which was published in the Sept. 6 issue of Science, Charkoudian and her colleagues discovered a way to harness the energy of microorganisms to incorporate fluorine into natural products.  Since the publication of their work in Science, the study has been picked up by a number of media outlets, including Nature and BBC online.

Looking to nature for inspiration, the chemists identified a strain of soil bacterium,Streptomyces cattleya that houses the remarkable ability to catalyze the formation of carbon-fluorine bonds from fluoride in water.  Using an interdisciplinary approach spanning chemistry, chemical engineering, and biology, the team of researchers was able to isolate that pathway from Streptomyces cattleya and interface it with a polyketide biosynthesis pathway from a different bacterium.  Polyketides are a diverse class of some 20,000 structurally complex natural products, which includes some of the most powerful anticancer agents, antibiotics, antifungals, and insecticides.  â€œBy uniting these two naturally occurring pathways, we were able to sit back and relax while the engineered bacterial strain did all the heavy lifting to make fluorinated polyketides,” says Charkoudian, a Haverford chemistry major who received her Ph.D. from Duke University and was a post-doctoral fellow in the Khosla lab at Stanford University.

Charkoudian, who joined the Department of Chemistry in July, is now working with an undergraduate research group at Haverford to discover more ways in which chemists can enlist biology to make molecules that better human health and the environment.  Her team includes juniors Erin Berlew, Connie Friedman, and Alfred Niki von Krusenstiern (a recipient of the prestigious 2013 Beckman Fellowship), and seniors Matt Johnson and Alec De Vivo.

More information about the study is available here.