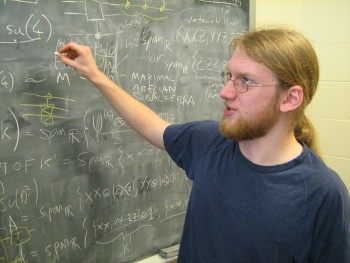 The recent graduate, who in February became the only student in Haverford's history to receive a Winston Churchill Scholarship, has now won the prestigious LeRoy Apker Award of the American Physical Society. The prize recognizes outstanding achievements in physics by undergraduate students, and only two are awarded each year: one to a student from a Ph.D.-granting institution, and one to a student from a non-Ph.D.-granting school.

“Byron was a great student, both in class and in his research work,” says Assistant Professor of Physics Peter Love, for whom Drury worked as a research assistant while at Haverford.“He was one of a number of Haverford students with an equal facility in both physics and mathematics courses, and who was therefore well prepared for a senior research project in theoretical physics.”

Drury was recognized for his work in decomposing quantum mechanical operations into sequences of simpler operations, which could be performed on future quantum computers.“He contributed both to the deeper understanding of an existing decomposition and provided a new constructive method in work already published in the Journal of Physics A: Mathematical and Theoretical,” says Peter Love.“I'm really pleased the Apker committee selected Byron, and I'm sure this is only the start of the contributions Byron can make to theoretical physics.”