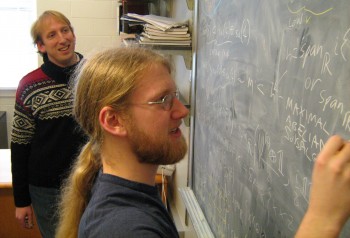 Published
Share
The physics major is the first Churchill recipient in the College's history.

There aren't many students who can claim to have studied at a college that counts Stephen Hawking among the faculty members in its physics departmentâ€”but next year, Byron Drury '08 will become one of these privileged few.

Drury is one of only 12 students in the United Statesâ€”and the only Haverford student in the College's historyâ€”to receive a prestigious Winston Churchill Scholarship, which provides for a year's worth of study at Churchill College, one of the University of Cambridge's schools in the United Kingdom. Administered by the Winston Churchill Foundation, the scholarship was created when the former Prime Minister approached American friends to create a mechanism for young Americans to study at his eponymous college. The first scholarships were awarded in 1963; they recognize students with exceptional academic records and the ability to contribute to advancements in science.

Physics major Drury is excited to study at a school renowned for its strengths in science and engineering.“My passions are math and theoretical physics, and at Cambridge the theoretical physics department rolls them both into a neat little ball,” he says.“It's a fantastic opportunity.”

“Byron is an extremely talented and likeable, community-minded individual who put a lot of work into preparing his applications for Churchill and Cambridge,” says Philip Bean, Dean of Academic Affairs, who coordinates Haverford's fellowship applications.“The competition was formidableâ€”he was up against candidates from Ivies, major research universities, and many of the country's leading liberal arts colleges.  We were added to their list of nominating institutions only two years ago, and we therefore are all the more proud of the fact that a foundation as selective as Churchill conferred one of its scholarships on only our second nominee.  It reflects very well on both Byron's talents and personal qualities and the high caliber of a Haverford education.”

The set of all quantum operations, Drury adds, is called the unitary group.“In order to build a quantum computer, we must be able to perform unitary operations. They're difficult to implement in practice; there's only a small set we can do.” Drury explores how to take these complicated elements and break them into steps that can be easily performed. He also deciphers the mathematical theories and abstract algebra that allows one to perform quantum computations.

Drury works primarily with lie groups, a multi-dimensional mathematical structure of smooth space.“They've been used a lot by physicists in recent years,” he says.“They take what mathematicians have been thinking and apply them to physical situations.”

During his year at Cambridge, Drury will take additional courses in quantum information and lie algebra theory. He plans to later pursue a Ph.D. in physics, but he finds math“fascinating and beautiful” and will seize this opportunity to load up on math classes.“It's valuable for physicists to have a solid up-to-date grasp of math,” he says.

Drury feels well-prepared for his future in the UK and beyond, especially after having worked as a student research assistant with Assistant Professor of Physics Peter Love.“It's been a fantastic experience working with him, more collaboration than I expected from undergraduate research,” he says.“It's given me a taste of how difficult research can beâ€”you can spend weeks on end staring at an equation that's not simplifying.”

Peter Love, who calls Drury“consistently the brightest student in class,” says that the research that became Drury's thesis began as an experiment on his part:“I was a little curious to see how a Haverford student could cope with what I considered a very difficult project,” he says.“After only a few weeks of Byron's work I was very impressed with his progress, and I look forward both to continuing to work with him as we move towards writing the work up for publication, and to pursuing the consequences of this project with other Haverford students this summer and in the future.”

“In my many years at Haverford, Byron is clearly one of the most outstanding and original students I've run across, so I am thrilled but not wholly surprised that he became Haverford's first winner of the Winston Churchill Scholarship,” says Greg Kannerstein, Dean of the College.“Haverford physics majors have achieved some remarkable heights, such as the Nobel Prize won by Joe Taylor '63,  and I feel sure we will be hearing a lot more from Byron in years to come.”