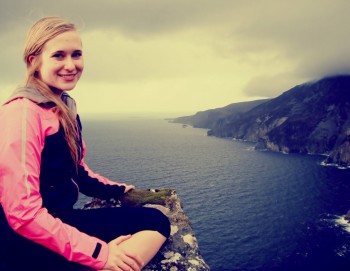 Published
Share
Dylan Woloszczuk '15 traveled to Belfast this summer to work with Community Restorative Justice Ireland, a nonprofit organization that works to moderate community conflicts that have persisted during the peace process in Northern Ireland.

While studying abroad at University College Dublin last fall, Dylan Woloszczuk '15 developed a love for Ireland's history and landscape, so this summer she decided to travel to Belfast to work with Community Restorative Justice Ireland (CRJI). Established in 1998, the nonprofit organization works to moderate community conflicts that have persisted during the peace process in Northern Ireland. Woloszczuk is the second Haverfordian, following Abby Brown '14, to intern with CRJI through Haverford's Center for Peace and Global Citizenship.

Woloszczuk, a psychology major, was raised as a Quaker and grew up learning about nonviolence and peacemaking. During her freshman year at Haverford, she decided to take part in the Anti-Violence Project, a series of community building workshops taught by Emily Higgs, the former Director of Quaker Affairs and Coordinator of Religious and Spiritual Life at Haverford.“Most of us didn't know each other, but we shared a meaningful experience,” Woloszczuk says.“After going through that, I could see how this could work on a larger scale.”

This summer, Woloszczuk's primary job was to research and write grant applications for various CRJI projects. The proposals were focused on building community and forging alternatives to violence by bringing together members of conflicting social groups and the Police Service of Northern Ireland. She says the internship was an eye-opening experience because it revealed to her just how palpable and present community conflict remains in Belfast.

“I did absolutely nothing that I expected to do, and that was one of the best things about my experience,” observes Woloszczuk, who says she was pleasantly surprised by the level of responsibility she was granted by the organization.