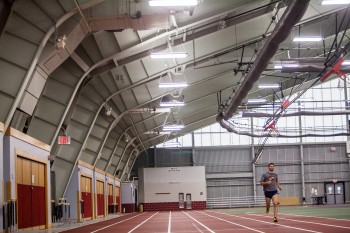 The new fluorescent lighting fixtures in the Alumni Field House are fitted with occupancy sensors that turn on the lights when heat and motion are detected and turn them off when activity ceases.

Sometimes, less is moreâ€”much more. That was the case with the Alumni Field House when Haverford's Facilities Management Department replaced 120 metal-halide lighting fixtures with 85 T-5 fluorescent fixtures. The project, which was completed in November, dramatically increased light levels in the Field House and sharply reduced energy and maintenance costs for the College.

Adding to the energy efficiency, each of the new fixtures has an occupancy sensor that registers both heat and motion to turn on lights only in areas being used, and turn them off when activity ceases. As a result of the changes, Anderko says he expects to see Haverford's electric bill reduced by $10,000 annually for the 58,000-square foot building, which houses the Gary Lutnick Tennis & Track Center, and features four tennis courts, a state-of the-art indoor track, batting cages, and playing fields for such sports as field hockey, soccer, and lacrosse.In addition, the ambitious lighting project qualified for a $14, 233 rebate from the College's local utility company, PECO.

“They want to limit the demand on their generating stations,” says Anderko.” And rebates are one way to incentivize folks like us to take on energy use reduction projects.

”Initially, though, it wasn't energy concerns that inspired the lighting revamp.“The original driving issue was that the lighting was too dim in the Field House, and the quality of the light was really bad; the metal halide bulbs didn't all burn evenly,” says Anderko.

Maintenance was also a problem. With lacrosse, baseball, and softball practices taking place in the facility, the bulbs in the rigidly fixed pendant lights were constantly being broken, and changing those bulbs required taking apart the fixture.

The new T-5 fluorescent fixtures, which resemble a larger version of standard shop lights, are hung from the Field House ceiling with aviation wire (which allows them to move when a baseball or lacrosse ball makes contact). The fluorescent tubes, which can last 30,000 hours, are easily replaced by flipping open the hinged wire cage that shields the bulbs from impact.

With the successful installation in the Field House completed, Anderko says that Facilities Management is now looking at what it will cost to change out the metal halide fixtures in the Gardener Integrated Athletic Center, and is also completing an audit of Stokes Hall to gauge the benefits of installing lighting controls, such as occupancy censors. Anderko and his team are also looking at a project that would replace the metal halide lights in the South Parking Lot with long-lived LED lighting (possibly with photovoltaic panels).

“I am also hopeful that we are going to be able to change out the existing fluorescent lights in the squash courts for LED lights,” says Anderko, who describes the current routine for changing the lights as“a maintenance headache” that requires assembling and disassembling scaffolding in each of the five courts in order to reach the fixtures in the soaring ceilings.

“We have to do that every two years,” he observes.“But if we put in LED lights, those will last between 7 to 10 years."â€œObviously any time we can save energy while improving the College in some way, it's a win-win,” says Jesse Lytle, President Dan Weiss's chief of staff, and Haverford's chief sustainably officer.  â€œOur challenge as a community is to continuously seek out these kinds of opportunities across the institution, which is at the center of the College's Climate Action Plan and the Plan for 2020.”â€”Eils Lotozo