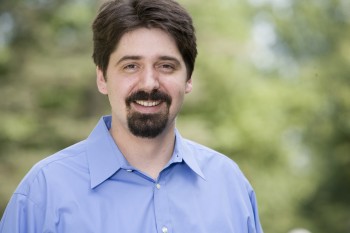 Published
Share
Germany's research includes studies of Roman comedy and drama and their influence on audiences of the time.

Germany's current research is a direct extension of his dissertation: He is studying the phenomenon of audiences imitating art as it emerged in Roman drama.“Romans were concerned about the possibility that theater would project itself onto an audience,” says Germany,“and they would absorb the ethical characteristics of what they were watching.” He is focusing on a particular play, Eunuch, in which a young man poses as a slave to be near a beautiful girl. In one pivotal scene, the man rapes the girl in imitation of a painting they both view, depicting Jupiter's rape of Danae.

“There's a problem of suggestion for the audience,” says Germany.“Will watching a play about rape influence you to commit one yourself?” He also points to a segment of the play in which the young man is threatened with castration for his crime:“His donned role of eunuch threatens to overstep the boundary of reality, in the same way the painting did.”

Germany's study of Eunuch is the second part of a larger project exploring metatheatricality or theatrical self-consciousness in Roman comedy.“Plays revealed their awareness of themselves as artifacts,” he says,“whether in a reference to the audience or an explicit invocation of the language of theater.”

At Haverford, Germany will teach elementary Greek, intermediate Latin, and a classical studies class on the ancient novel. In the future, he hopes to offer courses in postclassical Greek and Latin and the intersections of theater and philosophy.“Many [philosophical] issues were played out in comedies,” he says.“They were laboratories for Hellenistic ethics.”