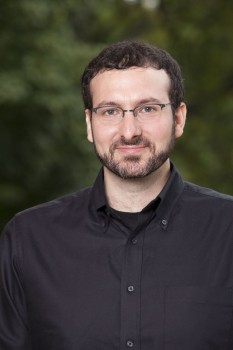 Published
Share
Friedman, a former journalist, focuses his research on U.S. built environments and how they have reflected international power relationships throughout the 20th century.

Andrew Friedman likes to imagine an interdisciplinary academic as a“feral intellectual.” Friedman, who has joined Haverford's department of history as an assistant professor, says,“I imagine a wild woodland creature running through the forest, taking what it needs from different disciplines to make sense of the world.” He was drawn to the field of American studiesâ€”in which he holds a Ph.D. from Yale Universityâ€”precisely because of its interdisciplinary nature:“Throughout the 19th and 20th centuries, political institutions and conversations about nationalism have had personal, social and cultural dimensions that affect us all.”

Friedman is also a writer who holds a B.S. in journalism from Northwestern and an M.F.A. in fiction from the University of Iowa; his articles have appeared in the Village Voice, the New York Times, and the Chicago Tribune.“I liked the idea that journalism was a route to engagement with public institutions,” he says.“It's a tool to decode reality.”

Presently, Friedman is focusing all of his writing energy on turning his dissertation, titled Covert Capital: Landscapes of Denial and the Making of U.S. Empire in the Suburbs of Northern Virginia, 1961-2001, into a book. He looks at built environments, such as the CIA's headquarters, malls, houses and airports, and how they came to reflect international power relationships in the mid-to-late-20th century.“It's a spatial and cultural history of how the CIA and other national security institutions that defined U.S. foreign policy created domestic space around their headquarters,” he says.

This semester, Friedman is teaching two history courses. The first,“History of the U.S. Built Environment,” surveys the ways in which cities and towns grew throughout the 19th and early 20th centuries, and how this eventually led to suburban sprawl.

His second class,“Political Technologies of Race and the Body,” traces the construction of ideas about race and gender and looks at different technologies, including blood transfusions, prosthetics and electricity, that played roles in shaping these ideas.

Friedman is excited to be part of a college that places such high value on interdisciplinary education.“People here can work on a single project without any of the disciplinary barricades that are so fortified at other institutions,” he says.