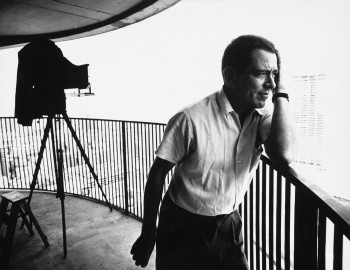 Published
Share
This exhibition is the first complete survey of the artist's career ever assembled and will run at the Cantor Fitzgerald Gallery from October 3 to December 14, 2008.

A major exhibition entitled American Horizons: The Photographs of Art Sinsabaugh will run in Haverford College's Cantor Fitzgerald Gallery October 3-December 14, 2008. An opening reception will be held Friday, October 3 from 5:30-7:30 p.m. in the Gallery. Organized by the Indiana University Art Museum, the exhibition represents the first complete survey of the artist's career ever assembled.

Art Sinsabaugh (1924–1983) is an artist ripe for rediscovery. After having trained and taught at Chicago's renowned Institute of Design, he made his artistic breakthrough in the early 1960s with a giant 12 x 20-inch“banquet” camera that allowed him to marry a 19th-century panoramic vision with mid-20th-century formalism. He was a landscape photographer in the broadest sense: He photographed spacesâ€”both rural and urbanâ€”that we inhabit. Sinsabaugh's remarkable photographs capture a richly nuanced sense of place and the ever-changing face of the American environment.

American Horizons: The Photographs of Art Sinsabaugh includes nearly 100 photographs, with the majority drawn from the Art Sinsabaugh Archive at Indiana University. The exhibition will survey all aspects of the artist's oeuvre, from his early design studies through his late work in the American southwest.

Although special emphasis will be paid to his two most important series, the Midwest Landscape Group and the Chicago Landscape Group, examples from his lesser-known materials, including his portrait group and color work, will also be included.

The exhibition kicked off a successful national tour in October 2004 at the Art Institute of Chicago before traveling to the Columbus (Ohio) Museum of Art, Krannert Art Museum at the University of Illinois, and Indiana University Art Museum (Bloomington, Indiana). The Haverford College visitâ€”the exhibit's only East Coast stopâ€”is part of an extended 2008 tour that most recently included the Monterey Museum of Art in California.

The retrospective is accompanied by the long-awaited monograph on the artistâ€”written by the exhibition's guest curator and noted photo-historian Keith F. Davis and published by Hudson Hill Pressâ€”and a video on the artist's life and work, produced by Indiana University Radio and Television Services. The Art Sinsabaugh documentary, which aired nationwide on PBS this summer, will be available for purchase through PBS Home Video.

Keith Davis will give a talk entitled“Art Sinsabaugh: A Critical Overview of the Man and his Art” on Friday, October 3, at 4:30 p.m. in the auditorium of Chase Hall. On Saturday, November 1 at 2 p.m.,“Time and Landscape,” a roundtable discussion responding to Sinsabaugh's work, will take place in Whitehead Campus Center 205 and will feature Haverford Professor of English Stephen Finley; Michael Spano from Sarah Lawrence College's Department of Visual Arts; and William Earle Williams, Audrey A. and John L. Dusseau Professor in the Humanities, Professor of Fine Arts, and Curator of Photography at Haverford. Nanette Esseck Brewer, the Lucienne M. Glaubinger Curator of Works on Paper at the Indiana University Art Museum, will give a talk called“On the Horizon: Iconography of Place in Art Sinsabaugh's Landscapes” on Saturday, November 22 at 2 p.m. in Whitehead Campus Center 205.

Major exhibition support has been provided by the law firm of Barnes and Thornburg LLP, the Lucienne M. Glaubinger Curatorial Endowment, and Bill and Nancy Hunt.  Additional project support has come through generous grants from the Judith Rothschild Foundation and the Graham Foundation for Advanced Studies in the Fine Arts.