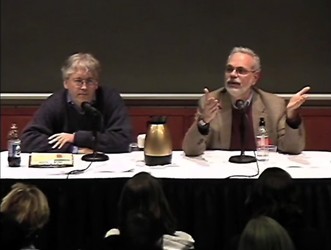 With America on the threshold of selecting a new president in the throes of the worst economic crisis since the Great Depression, it seemed like a very opportune time to address how important economic issues relate to the election. Two Haverford alums did just that Wednesday, October 22 in front of a standing room only crowd in Sharpless Auditorium.

Wall Street Journal Economics Editor David Wessel '75 and Journal of Economic Perspectives Managing Editor Timothy Taylor '82 addressed how the current economic crisis arose, the impact of the crisis, and upcoming important economic issues. The Department of Economics and the Center for Peace and Global Citizenship sponsored the talk, and NYU law student Caitlin Coslett '05 served as the moderator.

Wessel began by explaining the causes of the economic crisis to the 150 attendees. He believes that low interest rates, low savings, and high amounts of borrowing from Asian countries led to artificially inflated housing prices.

During the 2000s, the government exerted pressure on lenders to lower borrowing standards, and home ownership went from two-thirds to 70 percent.

“When we got to the point where we had people talking about NINA loansâ€”no jobs, no assetsâ€”it was a pretty sure sign that things had gotten out of control,” he said.

The housing bubble became a self-propelling cycle due to the efforts of“rocket scientists,” rating agencies, and regulators.

“Rocket scientists” sliced and diced loans to make them appear more attractive than they actually were. Government experts knew this was going on, but didn't see the deception as a big issue because, as a general rule, national housing prices don't fall.

“If you have a little poison and you dump it into a reservoir, the reservoir would dilute and it would be okay,” said Wessel, explaining their assumption.

“Unfortunately, what happened is we took a bit of poison, dumped in into the reservoir, and made the whole reservoir poisoned.”

“It's a classic failure of every one of the checks and balances to work,” he said.

In August 2007, the housing problem became a banking problem, which the Federal Reserve tried to alleviate by lubricating the financial system with cash. By the end of the year, Wessel said it was clear to economists that the housing market and financial systems were more closely linked than previously assumedâ€”therefore, the problems were much worse than previously thought.

The Federal Reserve cut interest rates by 1.25 percent in January 2008, an unprecedented move.

“It's a little like being in the Redwood Forest and the trees start falling,” he said.

At this point, countries began engaging in protectionist measures to ensure their self-interest. This phenomenon occurred prior to the Great Depression and exacerbated that crisis as well.

Taylor opened by arguing that political observers tend to focus excessively on current economic problems instead of forecasting future economic issues. To this end, Taylor identified 10 issues that he believes will rise in importance over the next few years.

“Any plan which plans to change everybody's existing health insurance is probably a non-starter in the U.S. political system,” he said.

“We are basically lying to ourselves about this now,” he said.“We're going to have a lot of oil, coal, and natural gas for several decades.”

Taylor encouraged political leaders to embrace globalization as a productive trend as opposed to a process that can be legislated.

“The rest of the world is where the economic growth is,” he said.“Walling yourself off from the places where growth is rapid is a really foolish economic policy.”

If GED degrees are not considered, the number of high school graduates in America actually peaked in the 1960s. Taylor believes serious reforms such as year-round schooling are needed to improve the education system and boost understanding of math and science.

Disparity between the rich and poor has grown dramatically over the past 30 years, particularly among the richest one percent of Americans. Taylor said that economic inequality will need to be addressed.

Taylor also suggested mandatory IRA and 401(k) coverage as a means of pension reform, since the average person in their 50s has less than $10,000 of median household wealth. He also said that $1.5 trillion will need to be spent in order to maintain existing physical infrastructure over the next five years.

Growth in the informational technology sector is potentially limited and should not be banked on over the long-term. Also, the democratic-controlled Congress will probably rewrite the tax code before the Bush tax reforms expire in 2010.

Finally, Taylor believes reforms to the immigration system must be made.

“We didn't know how exciting the economy could become,” she said.

This article originally appeared in the October 28 edition of the Bi-College News.