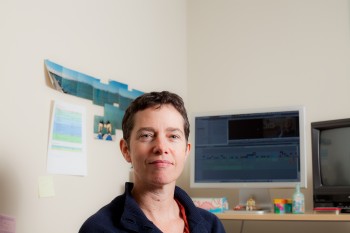 Published
Share
The award-winning filmmaker talks about the challenges of teaching documentary production.

Filmmaker Vicky Funari, whose award-winning documentaries include MAQUILÃPOLIS,Paulina, andLive Nude Girls Unite!, has seen her work screened at festivals around the world and aired nationally on PBS, Cinemax and the Sundance Channel. And since 2009, Funari has been a regular presence at Haverford, teaching courses on documentary film as a visiting instructor in Independent College Programs whose position is funded by the Hurford Center.

During the spring semester, Funari offered an advanced class in documentary production for the first time at Haverford. Four of the films made in that class were accepted into the second annual Tri-Co Film Festival, held in May, and three of them took home awards.

Tell us about the advanced documentary production class.

Vicky Funari: My goal with all of my film production classes is twofold: First, I try to teach the concept of what a documentary film is and to challenge students to critique and expand that concept with their own work. Second, I am teaching students to master the craft and the art form of the documentary. Some students come in wanting to learn this craft in service of some other scholarly discipline, while others are seeking it out on its own terms. An advanced class needs to serve both of these kinds of students.

Like my introductory-level course, the advanced class offered a nuts-and-bolts approach. We spent most of our class time learning technical and craft skills, and in critique sessions where they presented their work. Students also analyzed scenes from documentaries we watched at evening screening sessions each week. All in all, 23 shorts were produced in class; 16 were exercises, and 7 were final projects. The final projects that emerged were heavily autobiographical. Three were about absent grandfathers, but they were done in a wide range of styles. One student's final project was designed to complement her art history senior thesis, which was on cinematic representations of the past and memory in film.

What are the challenges of teaching documentary filmmaking?

VF: Students come into the class with varying expectations of what a documentary is. The underlying questions I hope to help them explore are: What can this art form, this language, do that other forms of inquiry, other languages, cannot? What aspects of the discipline of filmmaking must you master in order to speak this language with fluency? How do the techniques and decisions about shooting style, lighting, audio, editing, etc., in a documentary film add up to the message of that film?

One of the questions I ask myself is: How can I best teach documentary in the context of a liberal arts institution, where students are thinking about and learning various scholarly methodologies? They are being taught to think and learn primarily through verbal and mathematical languages and, sometimes implicitly, sometimes explicitly, through an expectation that rational thought is the most reliable basis of knowledge.

How do you help your students break out of that?

VF: I try to get them to release the grip of spoken and written language and to find ways of representing sensory experience and of telling stories through those experiences, rather than solely constructing verbal arguments. One of the warm-up exercises involves sensory storytelling. Students form teams of two, and each team member picks one bodily senseâ€”sight, sound, touch, taste or smell. Each student allows the chosen sense to guide an hour of shooting, and then the team members exchange their footage. They give each other no information or instructions, and each edits the other's footage into a one- to three-minute film. We ended up with some great stuff, including one piece about a train ride that one of the students takes regularly and particularly enjoys. The student who edited the footage turned it into this really lovely interlude about all of the sounds you hear on a train and about how sound affects lived experience.