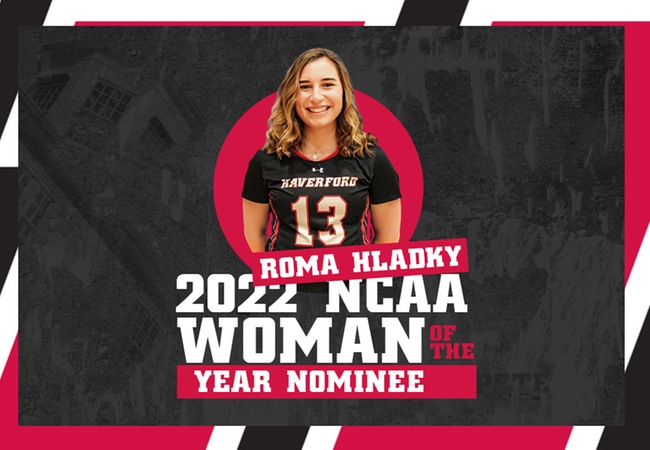 Haverford College women's lacrosse All-American Roma Hladky was selected as the Haverford College Department of Athletics nominee for the NCAA Woman of the Year award, the NCAA announced in its annual release on July 14.

Now in its 32nd year, the NCAA Woman of the Year Award honors graduating female college athletes who have exhausted their eligibility and distinguished themselves in academics, athletics, service and leadership throughout their collegiate careers.

Hladky put together one of the finest seasons in the history of the Haverford Women's Lacrosse team during the 2022 campaign, after playing in just six total games over her sophomore and junior season due to pandemic related restrictions and cancelations.  The Randolph, N.J. product continues to add awards to her trophy case as she was previously named PhillySIDA Academic All-Area in early June and was previously named an All-American by both the IWLCA and US Lacrosse Magazine in May. Those national honors came on the heels of an incredibly spirited campaign in which she finished her season in the Centennial Conference lead for goals (57), including a CC-best 36 tallies in conference competition, enroute to Centennial Conference Midfielder of the Year award honors.

In addition to that impressive goals mark, she posted multiple goals in all but one game this season, including a season-best seven on two occasions, reaching that benchmark against Washington College (Apr. 16) and Swarthmore (Apr. 23). Hladky was named the Centennial Conference Midfielder of the Year on May 10.

The physics major and Ambler Scholar Athlete was a force on draws as well, with multiple draw controls won in 13 games, and multiple ground balls on five occasions. Hladky is Haverford's first second-team or higher IWLCA All-American since Lindsey Carey earned the designation during the 2000 season, a year in which she was also named the Centennial Conference Player of the Year. Hladky guided No. 22 Haverford to a 12-6 overall record and a berth in the NCAA tournament, the program's first since the 1991 season.

Hladky stood apart as a leader in the Haverford College community as the second generation Ukrainian American and member of the Ukrainian Scouting Organziation, Plast, used lacrosse as a way to help support her community in the aftermath of Russia's unprovoked war on Ukraine. Hladky helped organize a special event at a Haverford game in support of Ukraine and helped assemble first ait kids to send to the frontlines. This summer, she is leading a month-long Ukrainian Scouts sleepaway camp with Plast, hoping to instill some of her values on the next generation of Ukrainian Americans.

Additional major leadership responsibilities for the astronomy minor included serving as an Attitutde Control Systems Intern at the NASA Goddard Space Flight Center in the summer of 2021, where she generated 3D models for five current CubeSat missions. Hladky is attending the University of Pennsylvania this fall as a part of Haverford and Penn's Mechanical Engineering and Applied Mechanics 4+1 accelerated program, with a graduate concentration in Manufacturing and Design.