Let's Hear it for Men's Tennis! 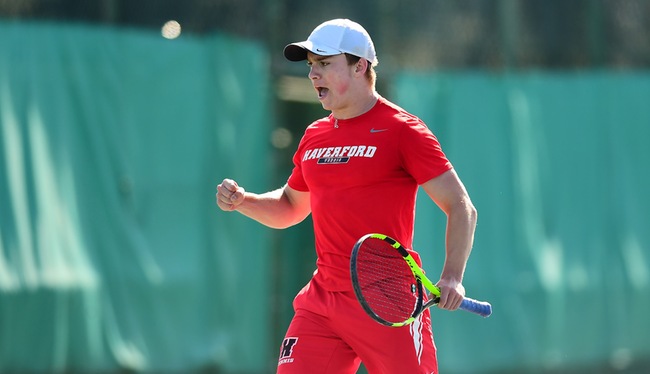 Welcoming former head coach Brendan Kincaid back to the Bramall Courts as the head coach of the Blue Jays, Eric Spangler's squad took advantage of early momentum with some clutch doubles wins. The Blue Jays took the first point of the contest, with Rohan Reddy and Marco Azar grabbing an 8-2 decision over Patrick Kley and Jason Edmonds.

Undaunted, the Fords grabbed wins from George Jiang and Stefan Johnson at the top doubles flight, taking down Thomas Yu and Vishnu Joshi by an 8-4 final. Jackson Trevor and James McKenzie then took down Ryan Hellinger and Alexander Kernagis by an 8-6 decision to send the Fords to singles play with a 2-1 lead in hand.

Abhinav Nallapareddy extended the Haverford lead to 3-1 with his 6-1, 6-3 triumph over Nick Charanjiva at the sixth flight, but Thomas Yu got one back from Jiang at the top flight to trim the Haverford advantage to just one.

Brian Wang outlasted Stefan Johnson in a third-set tiebreaker at the fourth flight to even things back up at 3-3, and Marco Azar then got the best of James McKenzie in a straight set victory at the fifth flight to put the Blue Jays on the brink of victory.

Danny Loder fought back from a first-set loss to Andrew Tran, turning his 6-2 loss in the first into a resounding 6-1 win to set the tone for a third-set tiebreaker, prevailing 10-6 to knot the overall match at 4-4 and put things in the hands of Andreas Wingert at the second flight with a chance to clinch.

Wingert dropped his first set to  Reddy, but came back for a methodical 7-5 win in the second, putting the fate of the match in the hands of one more deciding set as a large crowd gathered to watch a chance at history on the Bramall Courts. The first year deftly held his own against Reddy, taking the 6-3 win to set off a raucous celebration as the roar of the crowd was easily heard from the other spring action taking place across campus.

Haverford earned its first win over Johns Hopkins since the 2006 season. Men's Tennis is now 44-37 in the all-time series against the Blue Jays, including a 24-13 mark at home.