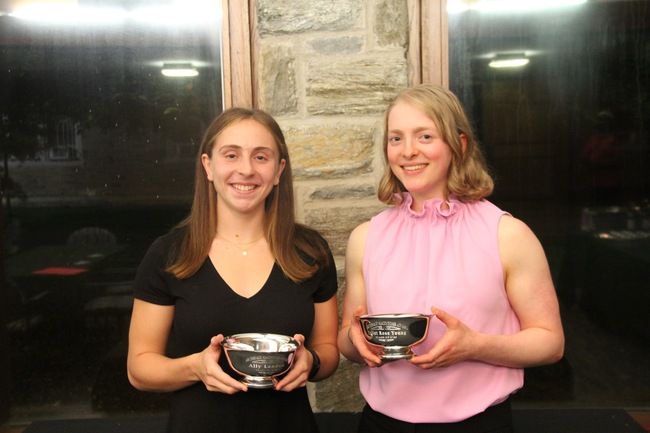 The MacIntosh Award honors the Haverford College sophomore who during their first-year on campus emerged as the top scholar-athlete in the class. Due to the impacts of the COVID-19 pandemic, the honor was not awarded in 2021, and thus was presented to both the top junior and top sophomore scholar athlete in 2022.

Sponsored by the Societies (formerly presented by Beta Rho Sigma), the award honors "Archie Mac," Class of 1921, who served the College as coach, Director of Athletics, Professor of Psychology, Director of Admission, Vice-President, and twice Acting President during his long tenure at Haverford. Now in its 58th year honoring academic and athletic excellence at Haverford, the award was first presented in 1964.

President of the Societies of Haverford College Dan Gordon '90 served as the Master of Ceremonies for the evening. Haverford College President Wendy Raymond, Director of Athletics Danielle Lynch and Bill MacIntosh (grandson of Archibald MacIntosh) also spoke during the ceremony. The evening concluded with the winners coaches introducing their student-athletes before Landau and Young accepted their awards and gave short speeches.

Although her first year on campus was severely impacted by the COVID-19 pandemic, Landau was able to work through that first year of adversity to record a sophomore campaign that made waves throughout the Centennial Conference. Proving to be an offensive spark plug for the Fords, Landau was also integral in continuing Haverford's track record of defensive success, as the Fords won the NCAA Statistical Championship for scoring defense during her rookie season.

In fact, Haverford allowed its opponents the fewest points across all three NCAA divisions. Showcasing a relentless defensive pressure, the Fords earned a 10th consecutive trip to the Centennial Conference tournament, reaching the semifinals after finishing with an 18-8 overall record (14-6 in conference play) and recording 18 contests holding opponents to less than 50 points on the season.

"Ally had the added difficulty of not only being a rookie, but being a rookie after a year with no basketball season due to COVID, so for her to be able to make that transition and have the success that she had is very impressive," explained women's basketball head coach Grace Elliott. "Ally's ability to dominate on the court and lead her teammates as a younger player is something that you don't see often with players in their first season. I am excited to coach Ally in these next two seasons of her college basketball career as she continues to develop and excel on the court."

"My teammates have been extremely supportive and have helped me become a better player and I'm so grateful that they challenge me everyday. All of my coaches have also played a huge role in helping me reach this accomplishment," Landau said. "I'm appreciative of Bobbi Morgan for recruiting me and helping me choose to pursue my athletic and academic career here at Haverford. I'm also appreciative of Steph Carideo and my assistant coaches last year for giving me the opportunity to thrive and improve during my first season of collegiate basketball."

In addition to her on-the-court success, Landau also made a transition to a rigorous academic environment with aplomb, overcoming a disjointed first year on campus and the challenges of time management with such a demanding schedule of responsibilities.

"I think playing a varsity sport at Haverford has actually made managing my time easier, in a way. I know each week that I will have a certain amount of time dedicated to practice and games for basketball, so I am able to be more efficient with the rest of my time in terms of my school work," Landau added.

She continued, "I'm also lucky to have teammates who are just as motivated as I am to be successful both on the court and in the classroom. We really hold each other accountable and find ways to push each other athletically and academically."

Landau's commitment to excellence in everything she pursues is something that is evident to those who have supported her journey throughout her time at Haverford.

Dr. Kelly Wilcox, Senior Associate Dean of the College, noted "We sometimes speak about scholar-athletes in abstract and aspirational tones. Ally, however, embodies and demonstrates the values, work ethic, passion, commitment, and drive that define a true Haverford scholar-athlete. She has exhibited great resolve and tenacity in overcoming a challenging first year in terms of opportunities for athletic competition and in person learning, and truly emerged as a leader and committed team member. It is exciting to bear    witness to her intellectual and athletic passions in the months and years to come."

Young was an instant difference maker for a Haverford volleyball squad that made a trip to the NCAA Tournament for the first time since the 2014 season. The Guilford, Connecticut product had a standout rookie campaign as she was Haverford's primary libero in her first year on campus and finished the season as both an All-Region first team and honorable mention All-America selection. Young is Haverford's 13th All-Region first-teamer, and first rookie to earn the award since Rebecca Salvo in 2006.

"Juliet made an impact in the gym almost immediately. She is incredibly committed to her development and was extremely coachable on day one. Really quickly, the coaching staff knew Juliet would play a massive role for us on the court from our first match of the season," said volleyball head coach Drew Hargrave. Her transition from high school to college volleyball was smooth particularly because of her intensity in the weight room even before she arrived at Haverford."

Hargrave continued, "Juliet continued that dedication and was one of the strongest female athletes at Haverford even during the fall of her first year. Her dedication on the court is matched by her commitment to her studies. She takes everything she does very seriously and makes sure she gives her all. Juliet is a very impressive young woman and we are thrilled to have her on our side for three more years."

"I want to thank my coaches, trainers, professors, advisors, friends, and family. Without the unwavering support I have received from all of them, I would not have reached this point, academically or athletically," Young said. "Every day, I have incredible role models who challenge me to be balanced in the classroom and on the court. From watching every single game - my parents mainly in-person and my grandparents and other friends/family by screen - to weekly office hours and late-night e-mails from professors and fellow students, I have received so much help and support. Thank you to everyone who has helped me grow into a more confident student and athlete, enabling me to impact my school and home communities."

Young notes that she has many strategies for ensuring that she is able to balance both academics and athletics at such a high level, and relies on many academic resources offered to Haverford students.

"One of my most-used strategies is looking one week ahead to ensure I am fully aware when large assignments are due. By planning ahead, I can schedule blocks of time to work on everyday class assignments and larger projects and exams," Young said. "I also make sure to communicate my schedule to all my professors, so I can make up for missing class."

She continued, "My favorite academic resource thus far has been the Haverford Writing Center. Whenever I have a longer paper due, I try to schedule one or two appointments with a writing center tutor, so I can talk through my ideas and hear another perspective. Overall, I think planning ahead and starting work early has been extremely helpful for managing academics and athletics."

Her ambitions were noted by her advisor, Professor of History Linda Gerstein and Chair of Independent College Programs. Dr. Gerstein added, "Juliet is a very good student, full of curiosity, who wants to major in everything. She has a mastery over her time and is a devoted athlete."