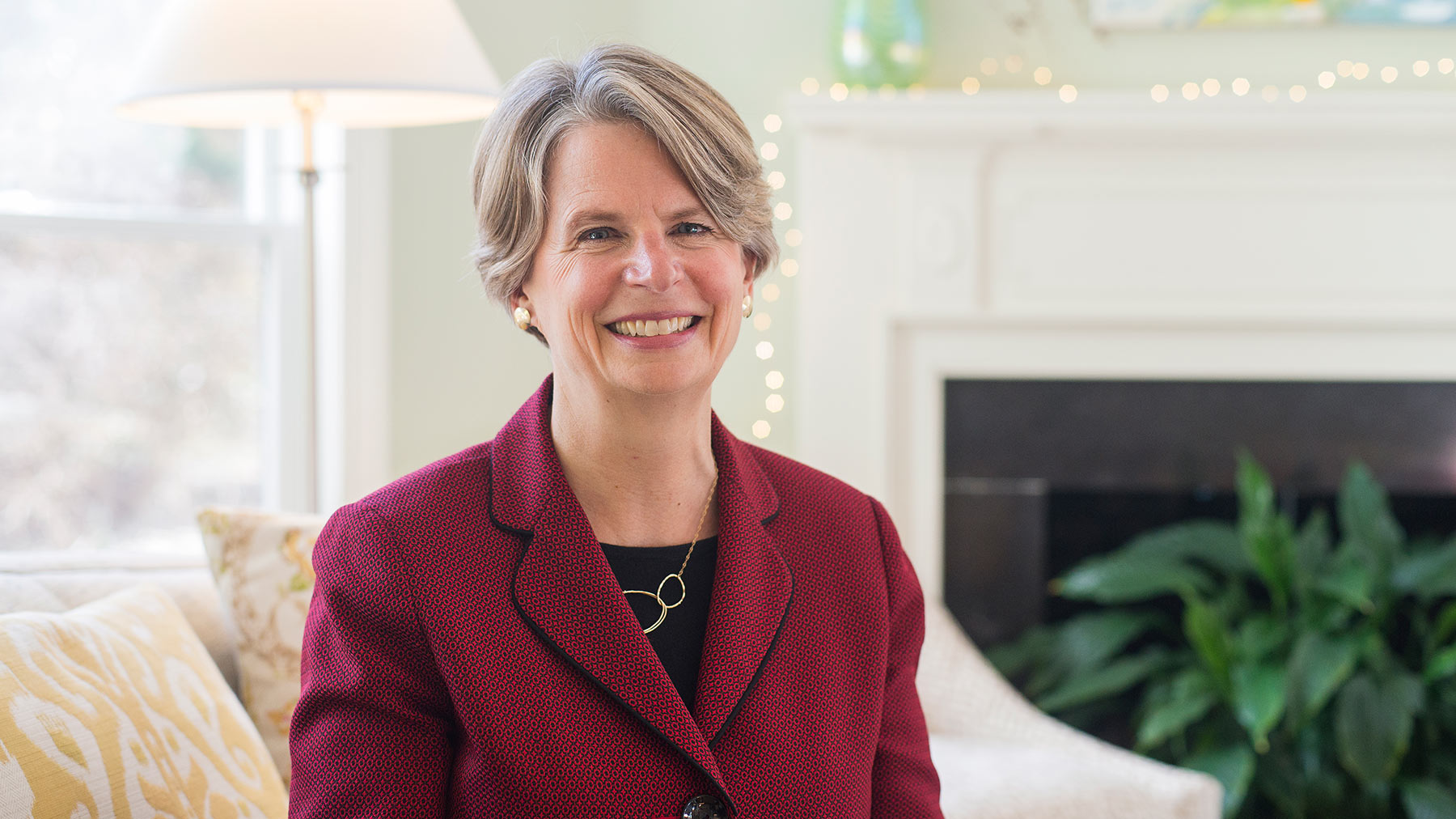 "Wendy Raymond is the ideal leader to build on Haverford's current momentum and ensure that the Haverford education continues to deliver immense value in the future to our graduates and to the communities they serve," said Rick White '81, chair of Haverford's Board of Managers. He announced Raymond's appointment on Dec. 7.

"I'm grateful, humbled, and excited to have this opportunity at Haverford," Raymond said. "Haverford's long-standing commitments to integrity, community, and the life of the mind and of the heart have never been more relevant to the world. I see a deep alignment with my personal and professional values."

Raymond joins Haverford at an important juncture: the College recently concluded the record-breaking Lives That Speak fundraising campaign, which raised nearly $270 million, and is preparing to wrap up an ambitious strategic plan called the Plan for Haverford 2020. Both the campaign and the strategic plan have emphasized access and affordability; major campus renovations; new academic programs; and diversity and inclusion; among other priorities.

Raymond's background and experience speak to all of these, according to Hunter Rawlings III '66, emeritus president of Cornell University and a member of the search committee. "Wendy Raymond is a first-rate leader with a background in top liberal arts colleges that is ideal for Haverford's presidency," he said. "I could not be more confident that Haverford is in excellent hands going forward."

A native of Mequon, Wisc., Raymond enrolled at Cornell University, where—intending to become a lawyer—she initially planned to major in government. A chemistry class taken to satisfy a distribution requirement her first year, and an encouraging teaching assistant, changed the course of her career. "It was a time when there were very few women in chemistry, and the T.A. took me aside and let me know that I had promise," she said. "It was an act of inclusion. It opened my eyes to the possibility that I could actually do this—that I was welcome in this domain." Raymond went on to major in chemistry, graduating magna cum laude and Phi Beta Kappa. She then earned a Ph.D. in biochemistry from Harvard University and spent four years as an American Cancer Society postdoctoral fellow in genetics at the University of Washington.

She began her career as an assistant professor of biology at Williams College in 1994, working her way up the ranks to full professor. Her research, focused on cellular biology and genetics, was funded by the National Science Foundation and the National Institutes of Health, and she taught undergraduate courses in biochemistry, molecular biology, immunology, and genetics, among other topics. She also was program director of an undergraduate science education program supported by a $1.6 million grant from the Howard Hughes Medical Institute.

It was at Williams that she became "passionately dedicated," as she puts it, to diversity, equity, and inclusion in higher education. In 2007 she was named Williams' first-ever associate dean for institutional diversity. In that role, she developed a training program for department chairs in inclusive hiring practices, and recruited, advised, and mentored pre-tenure faculty members of color.

Raymond has received several top teaching prizes, including the Harvard Danforth Center Teaching Award and Williams College Faculty Member of the Year, awarded by the student government for her teaching and mentoring. The Williams College Minority Coalition, Multicultural Center, and Davis Center twice named her their Faculty Member of the Year, an award given to those who have had an "extraordinary impact on students' lives."


In Wendy, students will find that they have an ally and someone who has the shared interest of making Haverford College a better place.

"Wendy's commitment to mentoring students shows in how she talks about her role as a teacher, scholar, and leader," said Maurice Rippel '19, a student member of the search committee. "She has distinguished herself as an excellent collaborator and listener, and she's proven herself to be a strong advocate for her students throughout her scholarly and administrative career. In Wendy, students will find that they have an ally and someone who has the shared interest of making Haverford College a better place."

At the national level, Raymond served from 2010–16 on the Committee on Equal Opportunities in Science and Engineering, created by Congress to advise the National Science Foundation on ways of fostering the involvement of women, minorities, and people with disabilities in scientific, engineering, and professional fields. She chaired the committee from 2014–16.

After 19 years at Williams, Raymond was appointed vice president for academic affairs and dean of faculty at Davidson College in 2013. As Davidson's chief academic officer, she leads the college's 193 faculty members; is in charge of recruitment, support, evaluation, and retention of faculty and administrative staff; oversees curriculum development; and manages a budget of $35 million. She also serves as the college's chief diversity officer. She has championed curricular innovation, including a new requirement that all students take a course in justice, equality, and community. Under her leadership the faculty established a new academic department—Health and Human Values—and she helped establish the Spencer-Weinstein Center for Community and Justice. She holds the rank of professor of biology at Davidson, and has taught a 300-level course on the evolution and roles of non-protein-coding RNAs.

"Wendy leaves Davidson a better place," said Davidson President Carol Quillen. "She helped build an environment where our entire community works together to see beyond the well-traveled path. She helped make it easier for students both to explore the intriguing places where disciplines overlap and to discover new knowledge through original research. She supported faculty as they nurtured a culture focused on learning, discovery, and engagement. …And Wendy brought Davidson a great distance in creating a more inclusive community. I am grateful for all she has given this community and excited for her as she assumes her new role at Haverford."

"I think a president is an encourager, a cheerleader for, and a partner in whatever the faculty want to do," Raymond said. "At Haverford I'll be looking for the faculty to lead that process, and then I'll be a supporter, someone who's standing behind them, because I am a faculty member at heart."

The move to the Philadelphia area will be a homecoming of sorts. Raymond is married to David Backus, a 1982 Haverford College graduate. He is a geologist and Covington Visiting Professor of Environmental Studies at Davidson. "I look forward to moving to the Philadelphia region, and to learning what it means to be in proximity with the issues and opportunities that are abundant there," Raymond said. "As we know, a cornerstone of the Quaker tradition is trying to build a more just and peaceful world. That is incredibly attractive to me—and to many across the globe." 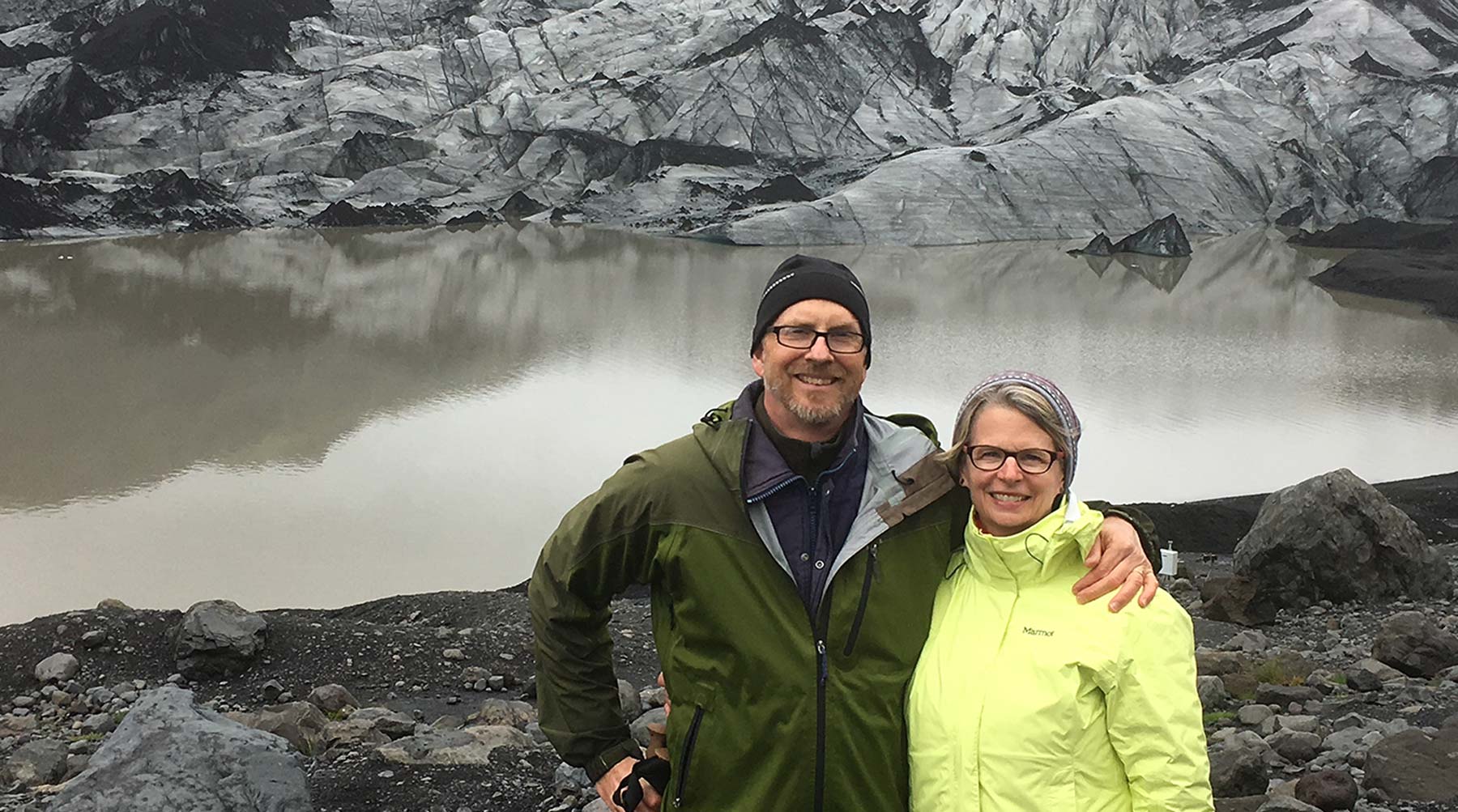 Dave Backus '82 with Wendy E. Raymond in Iceland on a Davidson alumni trip.

Raymond's appointment is the result of a national search conducted by a 17-member committee that included students, faculty, alumni, staff, and members of the Board of Managers, as well as a representative of the Bryn Mawr College Board of Trustees. Shelly Storbeck of the executive search services firm Storbeck/Pimentel & Associates assisted in the search.

"Wendy will be an outstanding leader for Haverford," said Charles G. Beever '74, chair of the search committee and a member of the Board of Managers. "Her appointment is the outcome of a thorough and rigorous search process that generated a pool of remarkable candidates, from which she emerged as the clear choice."

Community members—including those on campus as well as the College's network of 14,000 alumni—were invited to offer input into the process via a web survey, town halls, and other means. "The community made it clear that our next president should be a champion of the liberal arts for today's students in today's world," said Amy Taylor Brooks '92, clerk of the Corporation of Haverford College and a member of the search committee.

The importance of community, in fact, is something that attracted Raymond to the position: "One of Haverford's greatest distinctions is everyone's investment in the Haverford community," she said. "That has been part of the fabric at Haverford forever. And I know from my own life experience that having a strong community is a difference-maker; it elevates what each of us can do individually, and it provides a synergy and creativity that none of us can achieve on our own."

Raymond steps into her new role at a time of great change and challenge in higher education. She singles out three issues as particularly pressing. "These would be, to me, in diversity, equity, and inclusion; in fostering important dialogue across difference; and in affordability of higher education. Haverford has been long engaged in all of those endeavors, and I'm committed to continuing that engagement and improving it at all levels."

Raymond will succeed Kim Benston, who has served as president since July 1, 2015, and who will take a sabbatical before returning to the classroom. Benston, the Francis B. Gummere Professor of English, has been a faculty member at Haverford since 1984. He had served as provost for three years before being named president. He was a primary author of the Plan for Haverford 2020 and led the College's Lives That Speak campaign, which exceeded its initial fundraising goal by nearly $45 million.

A president has a lot of capacity to encourage and empower. 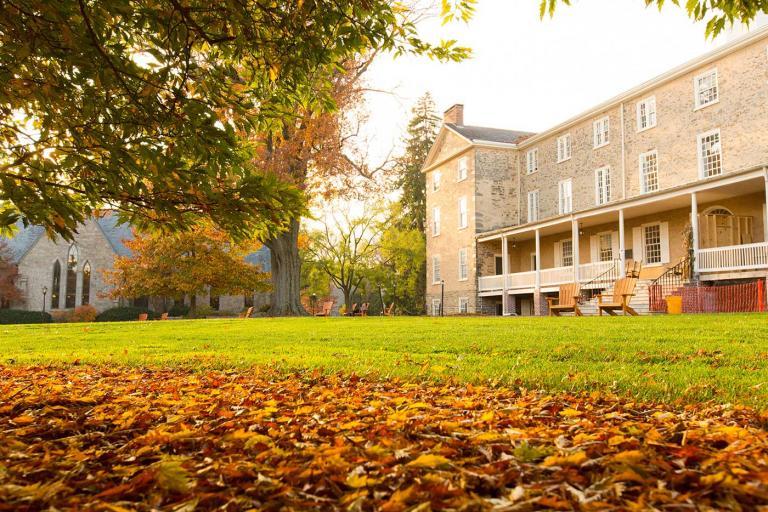 On Saturday, Sept. 7, Dr. Wendy E. Raymond was officially inaugurated as the 16th president of Haverford College—a position she has held since July 1, 2019—in the presence of students; faculty; staff; alumni; members of the local community, the Board of Managers, and the Corporation; and delegates from 90 institutions around the world.

The day was a celebration not just of the start of Raymond’s presidency, but also of her commitment to the values that fuel the mission of the College. Many of the speakers at the ceremony affirmed her dedication to diversity, equity, and inclusion in higher education, and spoke of her collegiality as a coworker and mentor.

Visit the Haverblog for a full recap and photos of the event.

On Dec. 7, Wendy E. Raymond met community members at a welcome reception and joined current students for dinner in the Dining Center.

On the consensus recommendation of the Presidential Search Committee, the Board of Managers appointed Wendy E. Raymond as Haverford’s 16th president, effective July 1, 2019.

The Search Committee’s membership was determined by the Nominations & Governance Committee of the Board of Managers, which, in addition to naming members from the Board, received nominations from the faculty, staff, students, and Bryn Mawr College. Each member of the Presidential Search Committee brings a distinctive perspective to the process but is charged with representing the interests of the entire Haverford College community throughout the search.

Not more learned, but imbued with better learning